If you follow me on Twitter, you’re aware of why last week’s article reviewing 2027 and updating on 2028 never got posted. Let’s take a quick look back at the ’27 season before diving deep into ’28.

After an ugly 74-88 in 2026, we were demoted from Iron back to Stone and we took advantage of moving down a level with a robust 96-66 record. Unfortunately, it was only good for a 2nd place finish behind a 102-60 ballclub. In fact, the 96 wins would’ve only won one of the six divisions and not only did it fall a game short of the wildcard in my conference, but it would’ve been three games shy in the other conference, too!

Five teams won 100+ games while six were at 60 or fewer. Five teams also had a Pythagorean Record of 100+ wins which I only point out because two of them are different than the ones who actually reached the mark, INCLUDING US!

*I usually write these on a Tuesday or Wednesday when the season has rolled over to the new one and the information available isn’t as plentiful. Writing this one on Sunday night gives me full access to the season so I’ll be getting into a lot more detail than normal. I’m not always able to do the write ups on Sunday nights but if you like the more detailed look at the season, let me know and I can start collecting screenshots on the stuff that isn’t accessible once the calendar flips to the new season.

I wasn’t looking forward to the return to Iron after the failed 2026 campaign. I didn’t make any personnel moves prior to the season and while I thought they could improve upon the 74-88 mark from ’26, I was seeing something like a .500 team.

As the #1 seed, we awaited the Wildcard winner between Spooner Rails (91-71) and Wooster Wins The Wins (85-78). Yes, that’s really the team name, and frankly, I’m glad they lost 5-4 despite getting 14 hits to just 8 for Spooner. So Spooner made their way to Red Bull Stadium (open to a new stadium name if you have any ideas) in Austin, TX for the 5-game series. We went 10-9 against our division foe on the season.

We entered the bottom of the 9th of game 1 down 3-1. Closer Nick Burdi allowed back-to-back singles but then notched back-to-back strikeouts of Ray Durham and Derrek Lee, bringing the Rails to the brink of an opening win on the road. On a 3-1 count, Jackie Jensen ripped a single to right-center, scoring Joe Sewell easily and prompting Melvin Mora – he of the electric 31 speed rating – to challenge the strong arm of centerfielder Happy Felsch (82 rating, out of 100)… and succeed!

Game tied with two runners still on. Victor Martinez walked and left Jerry Mumphrey with a bases loaded opportunity. He ripped a flyball with a 98 mph exit velocity that took Cliff Floyd to the edge of the warning track where he caught the ball with his back touching the wall. In the top of the 10th, Willie Hernandez, in his fourth inning of work, dispatched the Rails 1-2-3 including two strikeouts. The bottom of the inning saw Burdi remain in the game… 4 hits, a walk, 2 runs, and 33 pitches later.

He got Madrigal to flyout on a 3-1 count, but then Sewell ripped a 101-mph groundball and reached on an error by 1B Austin Meadows (the Rails have trained Meadows at 1B a bit, but only to an 18 rating). Mora was once again in a situation to come up big and he embraced the moment. He tattooed a 1-0 slider into the left-center gap and sent Sewell off to the races. A solid secondary lead before the pitch gave Sewell a real chance to score and third base coach, Benny “The Jet” Rodriguez, was sending him from the jump. Larry Rosenthal’s weak 31-rated arm wasn’t enough to get Sewell (51 SPD) and we secured a game 1 walkoff win.

That was about it for Division Series excitement, though, as we handled games 2 and 3 pretty easily with 6-2 and 5-1 wins. Ray Durham popped a homer in each, Jack Flaherty and Adam Wainwright both went more than seven innings in their starts, and Jackie Jensen went 4-for-8 with 2 BB, 3 RBI, and 3 R giving him a .417/.500/.583 line in the series and earning him the Division Series MVP.

The Ilsan Lucite Tokkies (86-76) also swept their LDS to set up our LCS starting in Austin after a few off days. The Lucite Tokkies almost lost the division to the Wooster Wins the Wins as they lost their last four while Wooster won their final eight and came up just a game and a half shy of overtaking Ilsan. We split our six games against them in the regular season and this series would prove to be similarly close.

We took the first game 5-4, but then dropped the next two 6-4 and 8-7. A solid 5-3 win in game 4 boiled it down to a best of three for a trip to the World Series. In game 5, Wainwright went the distance and allowed just one run while Jackie Jensen hit a 2-run homer and Elmer Flick chipped in an RBI triple to fuel a 3-1 win. Five runs in the first three innings of game 6 gave us a comfortable lead that we held onto en route to a 7-3 win that secured our second World Series appearance (first since 2022).

Later that day the South Coast Whiptails coasted to a game 7 win thanks in large part to a Tim Hudson shutout that secured the 5-0 win and World Series berth. The two teams traded punches in the first four games with South Coast winning games 1 and 3 while we won 2 and 4. A decisive 6-0 win in game 5 put us up 3 games to 2 but the Whiptails pummeled Alex Fernandez and forced a game 7 thanks to an 8-2 win.

Jack Flaherty and Bump Hadley dueled in the season finale before turning things over to the bullpen with the score knotted at 0. Flaherty went seven strong while Hadley tossed eight excellent frames. Willie Hernandez threw two perfect innings, including an 8-pitch ninth, leaving it to the offense. Ken Giles had a flawless playoff until he faced Ray Durham.

With a runner on and two outs, Durham smashed a high heater into the right field stands at 103 mph for the walkoff World Series win. The homer was his third of the series and made him a lock for the MVP. Durham hit .333/.400/.741 with 3 HR and 9 RBI in 27 AB over the seven games. 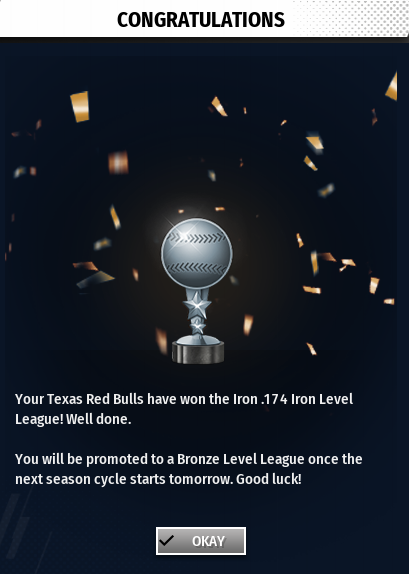 This was arguably our best season yet and now we’ll enter Bronze League on a high note.

RP of the Year

There’s the 2027 breakdown! The huge season boosted our bankroll up to 34,514 Perfect Points so it’s time to make some improvements. Those will be outlined in a subsequent piece.