2019 Statcast Park Factors (and the Importance of Spray Angle)

Last year, I took a stab at developing what might be loosely defined as park factors using Statcast data. (I called them park “impacts” because they lacked the requisite rigor to be true factors, although it’s all semantics, truly.) I sought to use Statcast’s expected wOBA (xwOBA) metric, specifically on batted ball events (BBEs), such that we would have a measure of xwOBA on contact (or xwOBAcon). This metric accounts for exit velocity (EV), launch angle (LA), and little else — which makes it perfect for this purpose.

The difference between actual and expected wOBA on contact indicates the amount of luck, whether good or bad, a hitter might have incurred on a particular batted ball event. In other words, given ‘X’ exit velocity and ‘Y’ launch angle, what is the most common wOBA outcome, and how much did the actual wOBA outcome differ from it?

The beautiful part about xwOBAcon is it strips away all other context. It removes elements that confound other park factor calculations, such as hitter and pitcher quality or even sequencing (vis-à-vis run-scoring). Except for fielding. Can’t control for fielding, unfortunately.

With this approach, we have the exit velocity. We have the launch angle. We have historical results for that particular combination of EV and LA to use as a benchmark. And then we compare.

The one thing xwOBAcon lacks, somewhat famously, is lateral (or “spray”) angle. A 380-foot blast is a monster shot down the left field line but a routine out to dead center. Spray angle definitely matters, and it matters by ballpark, too.

Alas: I have accounted for all of this!

I developed an interactive widget that lets a user examine the park factors (as measured by wOBAcon–xwOBAcon) by spray angle (binned according to left, left-center, center, right-center, and right fields using angle calculation methodology outlined by Bill Petti here). The user can then further delineate the factors. How about barreled fly balls by lefties? (The handedness split in conjunction with everything else might be my favorite feature.)

The second tab (‘EV–LA’) allows for more precise (but potentially too noisy) factors according to specific exit velocity and launch angle ranges. I prefer the first tab (‘BBE’), but to each his/her own.

I have shared this on Twitter, but this is my first time formally publishing it. Would love to hear feedback, so don’t hold back. (Unless it’s mean. I’m feeling fragile today! But it’s OK. Lay it on me.)

As for the importance of spray angle, see for yourself below: 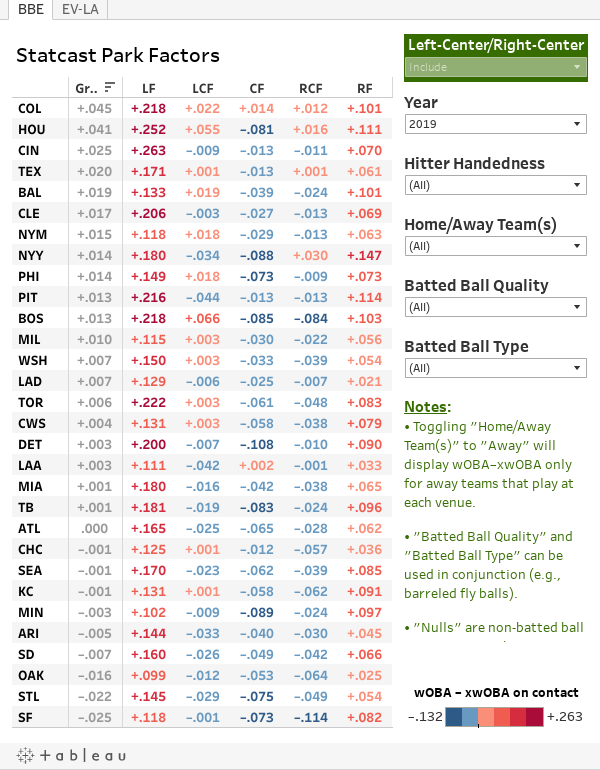 (If the widget above does not function correctly upon publication, please kindly click through here.)

Member
awy
You can flag a comment by clicking its flag icon. Website admin will know that you reported it. Admins may or may not choose to remove the comment or block the author. And please don't worry, your report will be anonymous.