Last year, I filled in for Stephania Bell at Tout Wars. This year I was invited to to join Tout Wars in the H2H league. I responded by putting together a team (that I think) is unlike any other that has ever been assembled on that kind of stage.

Before we get into the why, let’s take a look at the final product:

Yes, I spent $201 on pitching… Now, before you call me crazy or say that I am attention seeking, let’s talk about why I did this. It is all about the format. This year the H2H format switched to a points league from a roto categories league. Here is the point system:

Still think I am crazy? Probably, but there is method to the madness. The strategy is to dominate the pitching points and get enough from my offense to win the overall points each week while likely ceding the hitting points. In order to do this, I needed to spend more than the other competitors on the pitching side. I assumed (wrongly) that about a third of the people would look at the format and do a 50/50 split between hitting and pitching, a third would do a split favoring hitting, and a third would do a split favoring pitching. Here is how it actually shook out:

Only one team did about a 50/50 split, Clay Link of Rotowire. Everyone else went with a traditional hitting heavy approach. This allowed me to not only to invest more money in my pitching than anyone else, but spent more than double than all, but four of my competitors. Using our Depth Charts projections on, my nine pitchers all ranked in the top 63 in projected points in this format. Seven of them ranked in the top 31. Five of them ranked in the top 21. I should dominate pitching.

The question becomes, do I have enough offense to help me win the weekly overall with my fantastic pitching? I think I do. The Stars and Scrubs approach most people used in this draft allowed me to get some fantastic deals on the offensive side. I was able to Evan Gattis, (my second ranked catcher in this points format) and JT Realmuto (my fifth ranked catcher in this format) who both have tremendous value in this points league as they will get a ton of plate appearances. Catcher also has the worst replacement value and largest drop offs in terms of point production versus every other offensive position. Both Conforto and Murphy are coming off of injuries, but in a shallow league with unlimited DL, I was willing to take those risks for $2 and $9 respectively. Getting Chapman, Haniger, and Belt at $1 were steals. I feel like I got a ton of value on most of my offense. The only mistake was getting Zimmer at $6. I just wanted him because I have always been his biggest fan, but he is not great for this format due to how much he strikes out and the lack of value in speedsters. He may get cut early on.

There was a lot of discussion of how valuable closers were in this format. Many people pointed out that a save is as much as a win and that closers get 20-40 saves and starters only get 12-18 wins on average. I vehemently disagreed with that thought process. There is so much that can go wrong with closers. A blown save loses you three points and it can also come with a loss which loses you another three points. They also pitch a lot less innings and get less strikeouts, which limits their upsides. Less than 20 relief pitchers were worth more than $1 in this format last season and only five of them earned more than $10. According to my projections, only five of the relief pitchers that were bought are projected to outearn my last starting pitcher worst projected pitcher Marco Estrada. For the most part, closers aren’t worth much of anything in this format as far as I am concerned.

In the end, I feel like I had a good grasp of the format and executed my strategy almost to perfection. If the strategy is flawed, then I will pay for it. There is a bit of risk to my strategy, but not necessarily as much as some may think. The fact I am so overloaded in pitching means I can better absorb an injury or two to my pitching staff. It would be awful to lose an ace, but it would be catastrophic to lose my ace if he was the only one I had. The biggest part of the risk is will I get enough from my offense to help me carry the overall each week. That has yet be decided, but all the projection systems that I have see (including the on below that Jake Ciely posted) have me leading the league in points. 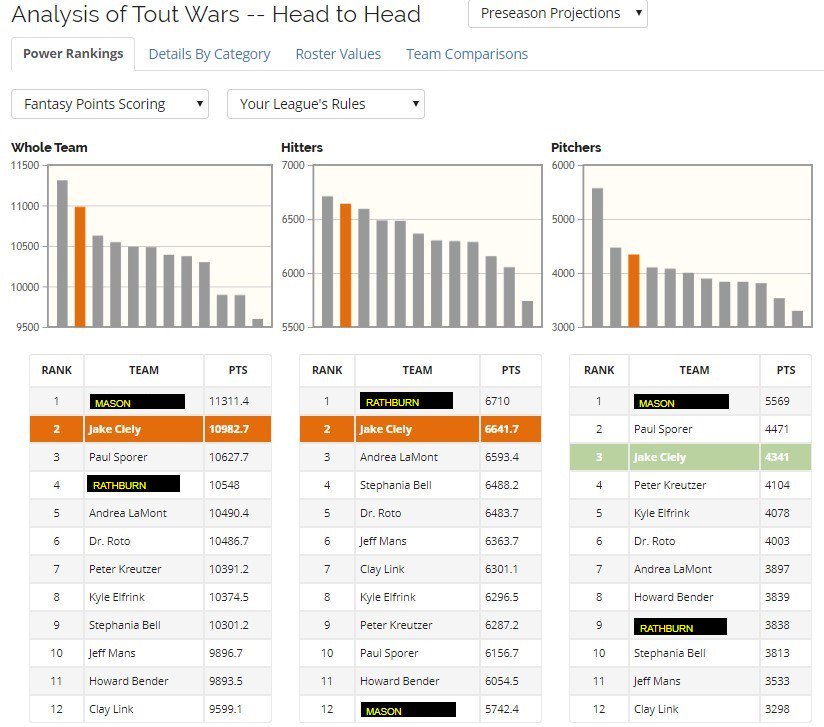 Now, obviously standings projections mean absolutely nothing, but it tells me that I should feel somewhat good about my chances. Still think I am crazy?

Justin is the co-host on The Sleeper and The Bust Podcast and writes for Rotographs covering the Roto Riteup as well as other periodic articles. In addition to his work at Rotographs, Justin is the lead fantasy writer/analyst and co-owner for FriendswithFantasyBenefits.com, and the owner of The Great Fantasy Baseball Invitational. He is also a certified addiction treatment counselor. Follow Justin on Twitter @JustinMasonFWFB.

20
You are going to send email to
Move Comment