Hi! Disclaimer: In this post I use raw Statcast data to calculate expected batting average (xBA). Evidently the raw data do not include the sprint speed adjustment that the Statcast folks said they made. That adjustment only shows up on player pages and in the search. This explains why it seemed to me an adjustment had not been made! The xBA values on player pages are much closer than the raw values and look similar to what I have presented below, and it explains my confusion herein regarding the matter.

So, this post reinvents the wheel a bit. Perhaps it can serve as a mini-primer or -tutorial for you. At the very least it can serve as further validation of the work that the folks at Statcast completed and instituted a couple of years ago. Just keep in mind that the original post below remains intact, completely unedited.

It has always seemed rather obvious to me that Statcast’s expected batting average (xBA) failed to properly account for a hitter’s speed (“sprint speed”). It seemed like fast hitters routinely outperformed their xBAs while slower hitters underperformed. In looking at a Statcast-era leaderboard (2015-21) of differentials between actual and expected batting averages on ground balls, obvious names rise to the top: Delino DeShields, Dee Strange-Gordon, Eduardo Núñez, Billy Hamilton, Jose Altuve, Jonathan Villar, Norichika Aoki, Mallex Smith, Jean Segura, Adam Eaton, Starling Marte… the list of players who have historically outperformed their xBAs by the widest margins are (were) all elite speedsters. At the other end of the spectrum, post-prime sluggers: Justin Smoak, Chris Davis, Logan Morrison, Jay Bruce, Kendrys Morales, etc. etc.

I thought this exact phenomenon, which is not a revelation by now, had once nudged the Statcast team to apply a sprint speed adjustment to xBA. Apparently, this happened sometime between the 2018 and 2019 seasons. Here’s the original snippet, which I very lightly edited for clarity:

Each batted ball is assigned an xBA based on how often comparable balls — in terms of exit velocity, launch angle and, on certain types of batted balls, Sprint Speed — have become hits since Statcast was implemented Major League-wide in 2015. (As of January 2019, xBA now factors in a batter’s seasonal Sprint Speed on “topped” or “weakly” hit balls).

This seems like a logical fix. Yet per the leaders and laggards above, it appears the Statcast team’s correction was not nearly strong enough. Shifting from a player-centric focus to a high-level view, here’s how batting average (AVG) and xBA (y-axes) compare by sprint speed (x-axis) specifically on ground balls, from slowest (left) to fastest (right): 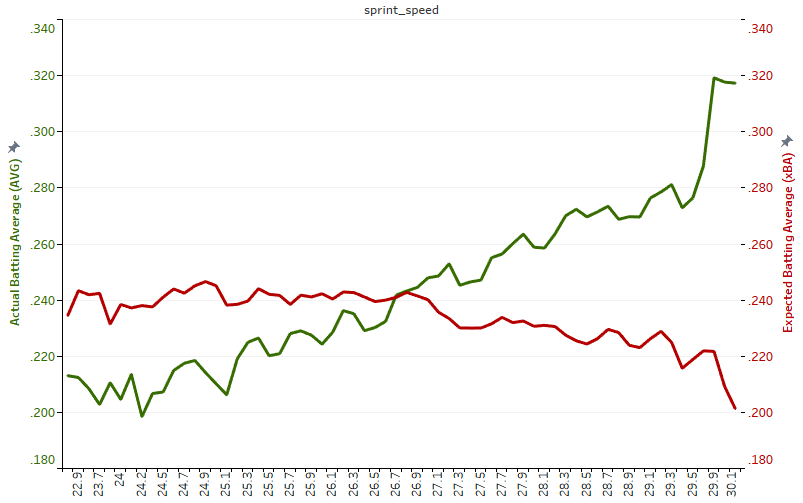 A couple of trends reveal themselves. The obvious: faster players hit for higher batting averages on ground balls. The less-obvious: xBA — which, again, accounts for exit velocity — implicitly captures the degradation of contact quality as sprint speed increases. The trend is less causal than it is correlative, but it fits a general stereotype of larger, slower batters hitting for more power, and thus generating higher xBAs, than smaller, speedier batters. That’s all well and good; exit velocity is the strongest determinant of batted ball production. But this approach fundamentally fails us on ground balls, where sprint speed prevails over exit velocity.

If we take the difference between the green line (AVG) and red line (xBA) and tweak xBA only on ground balls according to each hitter’s seasonal sprint speed, we improve xBA on all batted ball events: in terms of descriptive ability (correlation with AVG), the Pearson correlation coefficient (r2) improves from 0.46 to 0.57; in terms of predictive ability (correlation with next-year AVG), r2 improves from 0.17 to 0.23.

Again, in this context we are only describing the relationships between AVG and xBA on batted ball events — a subset of all at-bats. It’s like batting average on balls in play (BABIP) and home runs. BABIPHR. I don’t know. Look, creativity is not my strong suit. Anyway, it’s important to keep this in mind because the r2 value will weaken when you incorporate for strikeouts and other non-batted ball out, which round out the remaining at-bats that comprise batting average.

Still, the point stands: a sprint speed adjustment specific to ground balls will further improve xBA beyond the original tweak that accounted for “topped” and “weakly hit” batted balls. Furthermore, because, like, 98% of ground balls are singles, batting average and weighted on-base average (wOBA) on ground balls track each other linearly. If a speedy hitter’s xBA improves markedly because of his ground ball proclivities, so, too, will his expected wOBA (xwOBA). (The wOBA of a single is typically very close to 0.7; as such, a 10-point increase in xBA should correlate with a 7-point increase in xwOBA.)

The table below depicts the original xBA, new xBA, and actual AVG of all hitters with at least 150 at-bats through July 11. It’s worth noting the sprint speeds are a little stale (I pulled them a couple of weeks ago). Ideally, a player’s sprint speed will not have changed much in the meantime. And since I have only included players with significant playing time, there won’t be any issues with any hitters having completely absent sprint speeds.

Probably should have a sprint speed adjustment for liners and flyballs as well for xwoba and xslug since speedier hitters will be more likely to take the extra base.